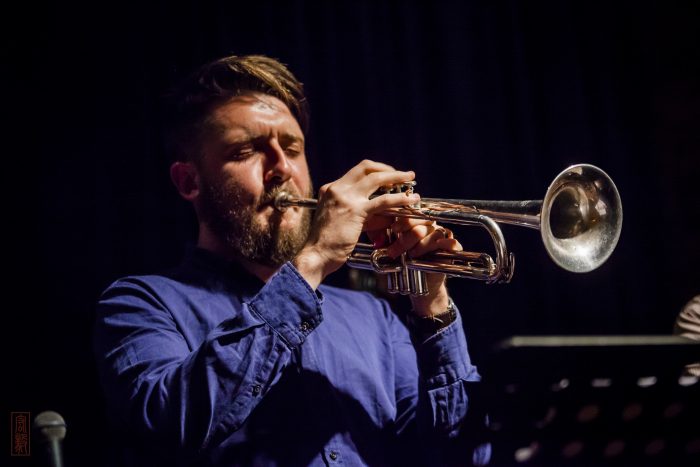 Reuben Lewis is a multidisciplinary trumpeter/composer/improviser based in Melbourne. Born and raised in Canberra, he completed his Honours in Jazz Performance/Composition under the mentorship of Miroslav Bukovsky and Larry Sitsky at ANU in 2011. Shortly after, he relocated to Berlin where he immersed himself and actively performed within the experimental music community.

Since basing himself in Melbourne in 2013, Reuben’s unique and diverse musical activity has earned him recognition among the national and global scenes. He leads I Hold the Lion’s Paw and The Inflorescence Ensemble, which both explore the in-betweens of groove music(s), collective improvisation and transient compositional forms. Reuben is a co-leader of the international new-music ensembles The Phonetic Orchestra and SVELIA, as well as a member of free-improvisation groups Palaver and Infinite Ape, contemporary-music ensembles Unfix and Australian Creative Music Ensemble (ACME), cross-medium improvisation collective THIS Ensemble and nu-soul outfit 30/70.

He was a participant in The Australian Art Orchestra’s Creative Music Intensive (2015 and 2016) as well as the inaugural MAP Delhi Residency (2015) with the Tony Yap Dance Company. I Hold the Lion’s Paw was selected for the inaugural Lebowski’s Development Residency in 2016.

Reuben has released five albums under his own name and various collaborations have received funding for creative development and new works. Recent commissions include “You keep still while storms flatten mountains” for The Bennetts Lane Big Band with vocalist Georgie Darvidis, “Knight in Armour” and “Know” for SVELIA, “Sleep Talk” for Unfix featuring Georgie Darvidis and Penny String Quartet, and “I know that I know” for ACME.

“Squeezed and oddly burbling lip manipulations, sounding strangely fleshy, were punctuated by the mechanics of the valves being operated, and sometimes left far below as a pure trumpet tone rose in unforced but soaring and somewhat operatic arcs.” – John Clare

“There’s an intensity of interaction and a love of pure, unaffected tone here, along with a slow, folk-affected melodic sense.” – canberrajazz.net