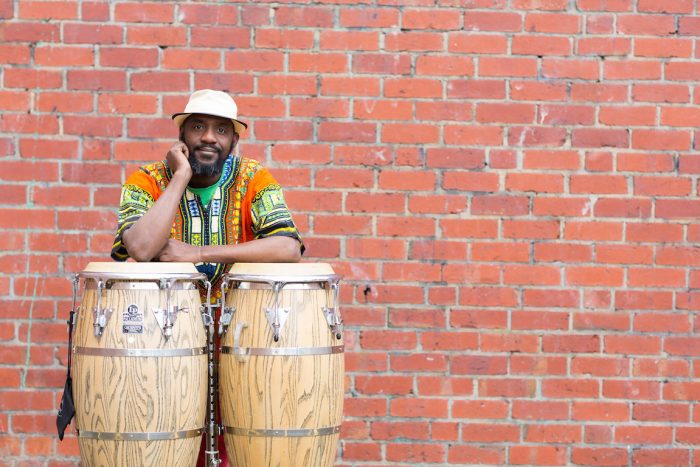 Well known as PANGA, self-taught percussionist, was born in Santiago de Cuba, where he got the connection with Music since his birth. His entire family has been involved with music in particular percussion. His ancestors who were brought from West and Central Africa, Senegal, Guinea and Congo, brought with them many African rhythms such as Papa Guide, Yoruba, Rumba, Tumba Francesa, Tahona. These were part of his everyday life and are these rhythms that helped him develop and explore well known musical rhythms such as Cha Cha Cha, Bolero, Pilon, Mosambique, Mambo, all these are a fusion of Africa.

His artistic life commenced when he was 11 years old performing in Street Carnivals and Kids Musical Theatre concentrating in Afro Cuban rhythms.

In 1993, he joined Sonora La Calle, which specialises in traditional Cuban music, adapting compositions from some of the great songwriters such as Felix Chapotin, Lili Martinez and others.

Since his final arrival in Australia in 2006, he have continued to remained involved in the music industry, participating in various recordings and also teaching private lessons as a way of delivering the Cuban flavour.

He has been part and performed in Australia with the likes of CARLITOS WAY, SAN LAZARO, CARINOSON, LA FAMILIA (Musical†Director), CLAVE MANIA, SENIVODA, AUSECUMA BEATS, THE AFFIA BAND, ROYALTY NOISE, JOSE NIETO & THE DREAM MAKING MACHINE, amongst others.

He has a vast knowledge of percussion. Music is in his blood and he loves it.