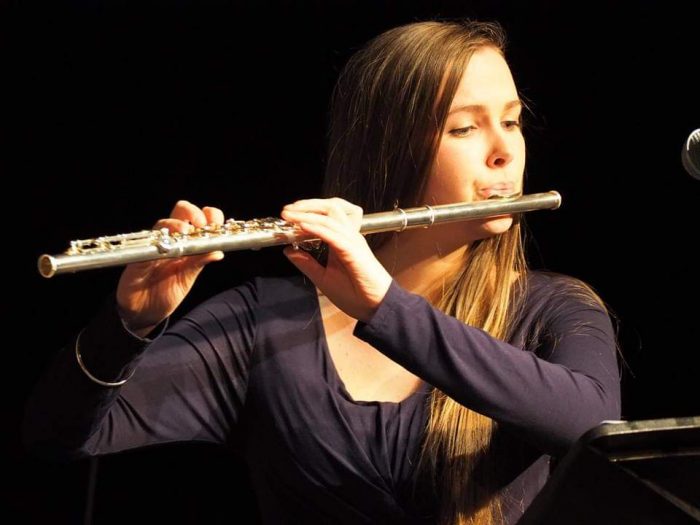 Music has been a huge part of Jessi’s life for the past 20 years now, after starting piano lessons at the age of 4. She began taking flute lessons at the age of 8 on a flute that was passed down through her family, and soon fell in love with playing music and the feeling of joy that it would bring her.

Jessi has completed many AMEB examinations on various instruments (piano, bassoon, flute, music theory), and has also completed VCE Music Performance on the flute – receiving a study score that put her in the top 9% of the state for that year. Jessi spent a year studying music at the Victorian College of the Arts Secondary School in 2011, and also plays the piccolo and bass guitar in her spare time. Her first taste of teaching music to others was in her final year of school, when Jessi was asked to teach the flute students in the Year 7 music program – Jessi has enjoyed sharing her love of music ever since.

Performing with others is a great way to enhance your skills and involve yourself with other musicians, and Jessi has had substantial experience performing in bands and orchestras over the years, including regular participation in summer and winter schools with the Peninsula Youth Music Society and Melbourne Youth Music. She was the Instrumental Prefect at Toorak College in 2015, and after many years of participating in ensembles at the school, she was asked to lead rehearsals and conduct the orchestra for their Autumn Concert. Jessi has performed alongside the Frankston Symphony Orchestra, and has also performed with Orchestra Victoria for their ‘On the mOVe’ concerts – she was one of two selected by the principal flautist to perform with the orchestra in a concert at the end of the year, which was a great honour.

Jessi is studying a Bachelor of Music at Monash University, with her principal instrument being the flute.

Jessi tailors her lessons to suit each individual student’s ability, as well as their personal goals for music, and aims to make lessons fun & affordable. Her lessons are suitable for students who are just beginning their musical journey, as well as students who have had previous experience.